This NYRA can’t be trusted on track changes

Monday is the deadline for commenting on the significant structural changes being proposed for Saratoga Race Course.  It has become clear that the current NYRA leadership, through a lethal combination of arrogance and obtuseness, cannot be trusted with the future of one of the nation’s most hallowed sporting venues. 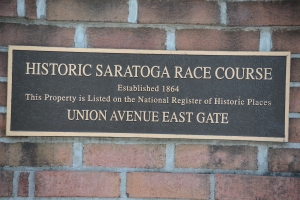 The deadline is occasioned by an environmental review process under a New York law known as SEQRA.  The NYRA web site has the complete description of the project that would make the following dramatic changes:

While there are a host of other changes  –  many of them necessary or desirable  –  these are the ones that would be most noticeable to the fan.

What is striking about the document called the Draft Generic Environmental Impact Statement  –  the SEQRA DGEIS, for those addicted to acronyms  –  is that it institutionalizes the separation of the well-off from the “commoner.”  Thus, the clubhouse extension would be a “high-end hospitality venue” with “higher-end amenities.”  Changes to the existing clubhouse would provide a “higher-end entertainment experience.”  Changes to the other end of the grandstand are designed to attract a “younger crowd to the Race Course by providing a more casual atmosphere.”  And, of course, the picnic table area is being moved farther away from the paddock, grandstand, horses, and those looking for that “high-end” experience.

This separation of the well-off from the unwashed masses is consistent with the philosophy of this NYRA Board, spearheaded by its leader CEO Chris Kay.  Last year’s modest admission and parking increases were controversial with the Board, although Kay ended up prevailing.  That paved the way this year for charging for the picnic tables near the paddock, as well as creating new areas in the Carousel for which NYRA is also charging a fee.

Kay and his “Chief Experience Officer” present these changes as a benefit to fans.  By paying to reserve a picnic table, you don’t have to wait for the gates to open and then race to secure a spot  –  a tradition that I never heard anyone complain about.  NYRA cancelled the Open House held on the Sunday before the meet begins.  It was a free event that drew thousands, including many families with young kids.  The Chief Experience Officer reportedly said that the local non-profits that benefited from this event complained that it was too much work for little gain.  I asked NYRA what non-profits had said they would not participate this year.  NYRA did not respond.

When Chris Kay announced his “Red Jacket” program that would honor Saratoga greats with a permanent plaque and, presumably, a red jacket, I thought it was hokey, but harmless.  It became not harmless, however, when Kay decided to cut down a half-dozen trees in the backyard to make way for the new structure now being built near the Carousel to house the “museum” for the red jacket recipients.

Since the DGEIS is intended as the blue print for changes to the Race Course, I went through it to see how Kay’s self-tribute was described.  It was not mentioned.  Even though the DGEIS identified certain “background projects” that did not have to be included  –  such as routine maintenance or repairs to existing projects  –  it did so anyway.  But Kay’s vanity project  –  kind of an over-sized Saratoga doll house  –  is neither listed as a new structure nor a routine event not subject to SEQRA.  I asked NYRA to explain this curious omission.  NYRA did not respond.

What we have is a NYRA leadership that knows little about racing or the Saratoga experience that looks for every opportunity to gouge fans.  It has no accountability because of a Board of Directors that is impotent, and a communications strategy that simply ignores legitimate inquiries.  Chris Kay has referred to the red jacket program as a “new tradition.”  Because he thought of it, I guess that makes it more important than the traditions most people associate with Saratoga  –  the trees in the backyard, going to the paddock, interacting with the jockeys on their way to the paddock, the mingling of the rich and the “ordinary” fan, the morning rush to get a picnic table.

The NYRA “Reorganization” Board was intended as a temporary transition according to the law that created it and its author, Andrew Cuomo.  The law required them to propose changes that would restore New York’s premier racing to private control by April 18 of this year, with the new entity to assume control on October 18, 2015.  It was the sole responsibility of the new Board under the law.  They did nothing, and the law had to be extended for another year.  This is not a group that should be in charge of permanent changes to Saratoga.  One of the few actual things they have done in their almost three years of existence was approving a plaque honoring themselves.  They did it in their first months as a Board although I doubt anyone of them could actually identify a contribution they, as a Board, made to New York racing. 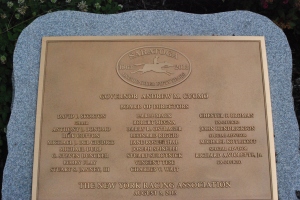 At the last meeting of the Board, member Michael Dubb urged Kay to expedite the improvements to the dormitories used by stable help.  The dorms have been described as deplorable, and were one of the reasons used by Governor Cuomo to seize control of NYRA three years ago.

But Dubb would have been as productive baying at the moon.  The construction workers building Kay’s museum could, of course, have been working on the dorms.  But this leadership crew doesn’t care about backstretch workers or the fans.  They only care about self-aggrandizement and squeezing as much money as possible from New York’s racing fans.

Comments on the proposed changes in the DGEIS can be sent to carolyn.dunderdale@ogs.ny.gov