Singing Bridge Stables is offering a unique and cost-effective opportunity to fully participate in thoroughbred racing.  This innovative Limited Liability General Partnership (Partnership) will focus on, and be for, racing purposes only.  Features that distinguish this Partnership from other industry offerings include:

Racing is an expensive activity, particularly in the better racing venues such as New York that have higher purses.  However, this Partnership is crafted to provide a low maintenance cost with a significant partnership percentage interest in the proceeds. This Partnership has transparent accounting and easy transition out of the Partnership if you decide at any time, or for any reason, to terminate the relationship.

Singing Bridge Stables is offering a Limited Liability General Partnership (Partnership) to race two (2)  two-year-old New York Bred thoroughbred fillies named Catch Your Dreams and Trading Kisses.  Both are by Arouse out of stakes-placed mares.   Arouse is the son of Lure, a multiple Breeders Cup Mile and Grade 1 winner.   As New York Breds, these fillies are eligible to run in races restricted to New York Breds with higher purses and increased stakes opportunities.

Both fillies are currently in early training at Holly Hill Training Center in South Carolina, and will continue their training at Jonathan Sheppard’s Ashwell Stables in Pennsylvania.  These flashy fillies are also Breeders’ Cup nominated.

The fillies will be trained by Jonathan Sheppard.  Mr. Sheppard has won two Breeders Cup races, trained multiple champions over the flat and jumps, sent out over 3,000 winners, and is locally known for winning one or more races each year since 1967 at the Saratoga meet.  He trained Informed Decision (2009 Breeders’ Cup Filly & Mare Sprint G1 Winner), Coudy’s Knight, Forever Together (2008 Breeders Cup Filly and Mare Turf G1 Winner), With Anticipation, Crowd Pleaser, Ratings, Alice Springs, Flatterer, and many other graded stakes winners.  He was inducted into the Hall of Fame in 1990.

The fillies were inspected by Mr. Sheppard in August, and he will be overseeing their training shortly after they have been broken to saddle.  The fillies will be shipped to Ashwell no later than January 1 where they will be initially turned out and given a break of a few months with Mr. Sheppard’s other newly turned two-year-olds, and then resume training under his care and oversight.

The management of these fillies will include down-time and avoidance of maintaining a race career through medication and excessive veterinary intervention.  Mr. Sheppard shares this philosophy and is one of the twenty-five trainers pledging to support Lasix-free racing.  Singing Bridge Stables also supports that goal.

Singing Bridge Stables is offering Partnership shares of up to forty (45%) of these fillies in both 10% and one 5% increments.  The Partnership will be limited to five (5) additional partners in each filly.  The smaller size promotes greater communication and stronger partnership role.  A ten percent (10%) share in one of the two fillies shall have a quarterly payment of $1,387.50 for a total annual payment of $5,550.

The Partnership will begin effective January 1, 2015.  If you wish to review the filly pedigrees, partnership documents, or speak with one of the Singing Bridge Stables principals, email singbridge@aol.com, or call (518) 583-7346 to speak with Madeline or Tom. 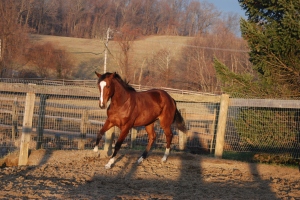